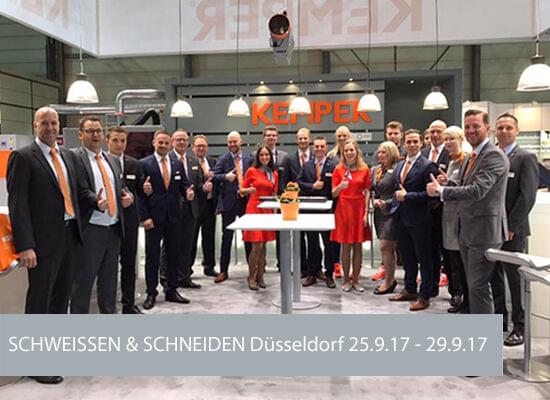 Vreden/Düsseldorf, September 26, 2017 – KEMPER GmbH further advances machine-to-machine communication. Currently, the manufacturer is presenting a new crossmanufacturer B2B portal at the SCHWEISSEN & SCHNEIDEN tradeshow. This portal is able to network equipment and systems that are Internet of Thingsenabled, beyond its own extraction technology. Overheads are thus reduced ignificantly. As part of this, KEMPER equips new extraction plants and room ventilation systems with a web-enabled control system.

“With the new B2B portal, the Internet of Things is no longer just a bubble,“ emphasizes Björn Kemper, Managing Director of
KEMPER GmbH. „The Internet-based cloud solution developed with our partner Datacake is a safe and cost-effective alternative for manufacturer-centered networks specifically for medium-sized business.“

Open to all IoT-enabled machines and systems
Not only does the portal network KEMPER extraction technology but also other IoT-enabled machines by other manufacturers. Thanks to the open standard, the user can integrate and monitor them on the www.gistry.io portal, as R&D
manager Simon Kemper, who has co-developed the platform, explains: “The user brings all equipment and systems together
in a clear portal and manages and controls them centrally.” When selecting a device, the portal visualizes current operating
parameters and other properties location-independent on smartphone, table or PC. Measuring data, settings and other
events are analyzed automatically and this information is made available to other machines in the network. The system is thus
able e.g. to predict a maintenance requirement.

Prevent downtime in advance
“The network proactively detects possible downtime of individual machines, which may lead to a stoppage of the entire
production chain,” says Björn Kemper. Detection of causes by service technicians is shortened thanks to the obtained
measuring data. Spare parts procurement can be planned more efficiently. “Operating costs are reduced greatly.”

The B2B portal is geared to the high security needs of mediumsized companies. The network is implemented autonomously.
Opening up in-house IT architecture is not necessary. The portal communicates independently based on the standard
Internet protocol.
Visitors to SCHWEISSEN & SCHNEIDEN are currently able to discover the next stage of digital networking live at the KEMPER and KEMPPI stand. Not just the plants physically present at KEMPER are integrated into the new B2B-portal, but also the air monitoring systems AirWatch installed at the KEMPPI and KEMPER Arena stand. Furthermore, the portal transfers the data captured by AirWatch at the KEMPPI stand to the KEMPPI WeldEye software. Thus, KEMPPI is able to integrate the external KEMPER sensor system.

New control system communicates via cellular network
KEMPER has digitized its own portfolio as part of the introduction of the new network solution. New equipment and system generations equip the company by default with a newly developed control system. They communicate via the cellular network using special IoT SIM cards. With the new B2B portal, the manufacturer goes a step beyond its Industry 4.0 solution developed for extraction technology. So far, the air monitoring system AirWatch controls the room ventilation system and extraction plants and communicates autonomously with them using its own wireless network. AirWatch controls the plants automatically if the dust limit values saved in the operating software are exceeded. Since its presentation last year, many metalworking companies are already using the occupational safety 4.0 concept successfully.