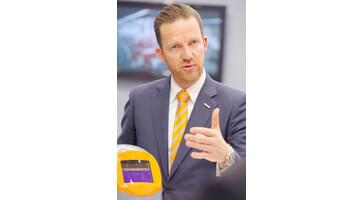 Vreden, 3 February 2015 – Growth well above the industry average.  KEMPER GmbH increased its turnover by 12 per cent in comparison to the previous year. After the EuroBLECH trade fair, the past November turned out to be the most successful month since 2008. The suction and filter plant manufacturer in Vreden in Westphalia, also expects great opportunities for growth in 2015. For this reason KEMPER is focussing specifically on the core business of suction technology and industrial safety for metal-processing companies, and is discontinuing the business branch of automation.

“Despite a difficult market environment ,we have established ourselves in the past year as the worldwide leaders in technology for  the industrial safety of metal workers,” emphasizes Björn Kemper, managing director of KEMPER GmbH. A representation of this is the conclusion of important contracts for the equipment of the largest welding school in Oman, for example. “We have been able to convince many users through our new product portfolio and the unique suction and filter technology.”

The upswing continues
In the 2014 business year , KEMPER’s growth of the recent years continued. The turnover increased by a total of 12 per cent. With order intake, the family enterprise recorded an increase of 11 per cent. The amount of series-produced equipment sold even increased by 27 per cent. November turned out to be the most successful month since 2008.

The family-run enterprise is thus looking confidently into the future. “KEMPER’s upswing will continue,” says Managing Director Björn Kemper. “We are also expecting further growth for 2015 that is almost as high as that of 2014.”

Operations in the business area of automation discontinued
KEMPER is focussing here much more on the core business of suction technology and industrial safety in metal-processing companies. The consortium was also on the market in the field of intra-logistic solutions up to now with KEMPER STORATEC. KEMPER is now discontinuing operations at the location of Waltrop.