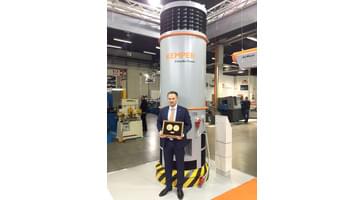 Vreden (Germany) / Kielce (Poland), March 23, 2016 - Excellent KEMPER technology: The STOM trade fair, Poland's most important platform for metal finishers, has been awarded the CleanAirTower as the best product in the field of welding. The general ventilation system was singled out by the independent panel of experts in particular due to its innovative function. The trade fair highlighted to the company that a further development in the Polish market was worthwhile. The mobile extraction and filtering devices were the focus of the trade fair visitors in particular. KEMPER is preparing to be become more active in Poland.

“We are already synonymous on the Polish market for high-quality extraction and filter technology for the metal-processing industry," says Poitr Kruk, who became Head of MEE Sales at KEMPER last year. The STOM trade fair in the Polish town of Kielce reflects this. An indication for this was not just the response from the visitors, but also the awarding of the CleanAirTowers award by the trade fair jury.

The general ventilation system achieved the best score within the entire welding product range. The innovative function was the deciding factor. The system is designed in accordance with the recommended Displacement flow principle and also features a unique contamination-free dust disposal, which KEMPER has registered as a patent. The system extracts the hazardous substances in the welding fumes and filters out more than 99% of the particles - and the majority of the virtually indiscernible ultra-fine dust particles, providing effective work protection for welders.

The STOM 2016 accrued numerous concrete project enquiries for the manufacturer. KEMPER presented the CleanAirTower in combination with AirWatch, an air monitoring and control system for general ventilation systems, for example. The grinding table with rear wall extraction as well as the ProfiMaster mobile extraction and filter unit with two exhaust arms also caused a stir. In addition, KEMPER presented its wide portfolio of mobile extraction and filtering devices: from entry-level models for sporadic welding through to devices for professional welders with cleanable filters for large amounts of fumes.

KEMPER is expanding capacity in Poland

KEMPER wants to continue on with the tailwind generated at the STOM 2016 in Poland. The Polish market has such increasing importance for the company that it invested heavily in the past year in capacities with a new team led by Piotr Kruk. KEMPER is also building up a new dealer structure. “Poland is an interesting growth market for us," says Björn Kemper, Managing Director of KEMPER GmbH, highlighting the company's increasing commitment there. "In terms of occupational safety and health, metal-working companies still need to catch up. We supply the appropriate technology to protect their employees."

KEMPER is continung to pursue contact with the Polish economy. The company will present itself and its portfolio at two further trade fairs - June 7-10 in Poznań at the ITM (Hall 5, stand 55), as well as in Sosnowiec at the ExpoWelding from October 18 to 20.